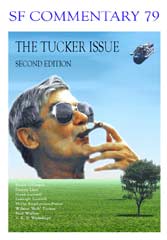 SF Commentary is a science fiction fanzine by Bruce Gillespie.

The first issue of SF Commentary appeared in January 1969. It has been published sporadically since then, missing the 1990s, but returning in the 2000s. The latest issue, #82, was released August 2011.

Reprints of articles by Bob Tucker (Le Zombie, Science Fiction Newsletter) are also included in the issue dedicated to him, "The Tucker Issue", #79.

Bruce Gillespie also published Dreams and False Alarms. Since the 2000s, he has co-edited Steam Engine Time with Janine Stinson.