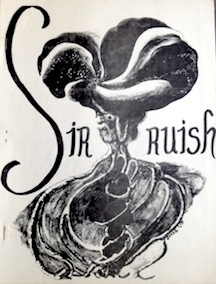 Sirruish was a science fiction fanzine produced by the Ozark Science Fiction Association.

Contributors of poetry include Jim Reuss, and Roger Zelazny, among others.

Contributors of articles include Jack Gaughan, and Harry Warner, Jr. (Horizons), among others.

in Fanstuff #27, Arnie Katz writes, "In some clubs, the energy was so intense that several people produced personal or general interest fanzines under the club’s general umbrella. A good example of this is the winter, 1967/1968 issue of SIRRUISH, edited by Railee Bothman out of Kirkwood, Missouri. A member of OSFA, the Ozark Science Fiction Association, Bothman filled her zine with typical OSFA hallmarks, including art by the great Jack Gaughan and nifty lettering by OSFAns Chris Couch and Hank Luttrell."

Don Brazier had previously been editor of Frontier, in the early 1940s, and went on to publish Title from 1972 till 1977, and Farrago from 1975 till 1978. Hank Luttrell also published Starling.