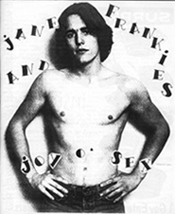 Jane and Frankie is a cut and paste zine published in Montreal, Quebec, Canada, by sister and brother Jena von Brücker and Klaus von Brücker.

Jane and Frankie were a fictional heterosexual married couple that the editors claimed to know. From the introduction to the first issue, entitled Don't Tell Jane and Frankie; "Ok, so you're probably wondering who Jane and Frankie are and why they aren't allowed to know about it. Well, Jane and Frankie are this pair who frequently arrive, unannounced, on our doorstep and, despite our protests about the disarray of our apartment, barge in, position themselves on the couch, and look expectant." They go on to say that their puritanical outlook leaves the editors no choice but to leave them in the dark.

The first issue was released in 1990. It featured detourned Wonder Woman comics; drawings of teen stars by Candy; "Excerpts from the diaries of Jill 7"; the first "Bitch Olympics", a contest for best bitchy come-backs; "Girl Trouble: a religious affair" by Jena von Brücker; "Where can a boy go for head?" by Klaus von Brücker, about his first blow-job; the comic "G.B. Jones Hits Montreal", about a recent visit, and photos and an interview with J.D.s editors G.B. Jones and Bruce LaBruce.

The second issue was called Jane and Frankie's Joy 'O' Sex, and featured the editorial "High Noon", about the Queer civil war against gays and lesbians; the winners of the Bitch Olympics, Candy Von Pauker and Michael Fahey; "Sex and the Single Slut" by Klaus von Brücker; part two of "Girl Trouble: a religious affair" by Jena von Brucker; a continuation of "Excerpts from the diaries of Jill 7"; a drawing by G.B. Jones; "Celebrity Slut", a photo essay in the style of the magazine Celebrity Sleuth featuring zine editors Stevec, Vaginal Davis, Beverly Breckenridge, G.B. Jones, Johnny Noxzema and Rex Boy, Bruce LaBruce, and Midi Onodera; and photos and an interview of Bimbox editors Johnny Noxzema and Rex Boy. It was released in 1991.

Jena von Brücker followed this zine with Jane Gets A Divorce, and then went on to co-edit Double Bill.