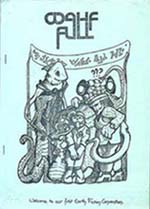 Contributors of poetry included Scroll The Appalling, by Stephen Donaldson from #9, June 1982.

Issue 12.5 was also the program book for Syncon 83, and included articles by Keith Curtis, Terry Dowling, and Jack Herman, and artwork by Marilyn Pride.

Jack Herman also published the fanzines Forerunner, and Sweetness and Light, among others.