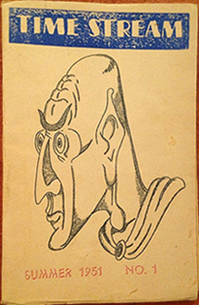 Following up their previous title, Worlds Apart, co-editors Paul D. Cox, J.T. Oliver, and Van Splawn released Time Stream in the Summer of 1951. Three issues may have been released. The Anthony Boucher Fanzine Collection (Arizona Archives) includes issue 2, from 1951, and The University of California Riverdale Library has issue 3 in its collection.

J.T. Oliver wrote short stories, some of which appeared in several fanzines of this period, and others published in anthologies such as Fantasy Book (Fantasy Publishing Company, Inc.. 1951), Spaceway (1953), and Science and Sorcery (Zebra Books 1978), all edited by Garrett Ford, pseudonym of William Crawford, editor of Marvel Tales. In May 2013, Bill Plott, editor of Sporadic, published a one shot titled, The J.T. Oliver Photo Collection on eFanzines.com. which includes photos of J.T. Oliver and Paul Cox, co-editors of Worlds Apart and Time Stream, as well as Lee Hoffman, and other writers and fanzine publishers from the early years of the last century.