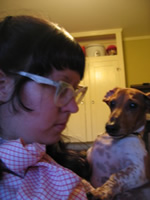 Nicole J. Georges is a zinester, artist and musician who lives in Portland Oregon and works at the Independent Publishing Resource Center.

She is the author of the zine Invincible Summer, an autobiographical mixture of comics, writing and illustrations. During the past nine years, Nicole has annually teamed up with Clutch McBastard and his zine Clutch for an split issue of their zines that features the work of both cartoonists.

Nicole is a founder of the Portland Zine Symposium, and an organizer of the Midwest Underground Media Symposium.

Originating in Kansas City, Georges moved to Portland, OR in 2000 and started Invincible Summer with caffeine and free time as motivators.

She has played with the bands Fact or Fiction, The Sour Grapes, The Bitter Dykes, and The Death Eaters.