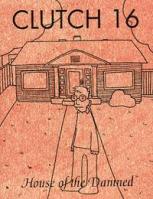 Clutch is a minicomic zine by Greig, aka Clutch McBastard, from Portland, Oregon.

In the intro to Clutch #2 "Forty Days," Greig writes, "This issue was a bit of an experiment. It's a cartoon diary of 40 days of my life from August 30th to October 8th. I drew about each day as it happened." Greig is a bit of a self admitted dork and his life is anything but exciting - yet these 40 days of mundane life were riveting. His drawing style is simple but very expressive in his day to day activities that usually started with something like, "woke up and drew comics'." How could one not be intrigued after reading panels like this from Sept. 22; "Later Gloria explored my mustard collection!"

In 2003, one issue of Clutch appeared as a split zine with Snakepit. During the past nine years, Clutch has annually teamed up with Nicole Georges and her zine Invincible Summer for a split issue of both their zines that features the work of both cartoonists.

Clutch #8 was one of the zines selected for the 2003 tour of North America by Mobilivre-Bookmobile, the travelling library of independent publications. Selections from Clutch appeared in volume nine of Zine Yearbook, released in 2008.