Not My Small Diary 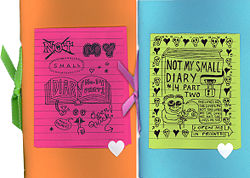 Not My Small Diary Issue 14

Starting with Issue 9, each issue has been released in two joint volumes. Many issues have featured unusual bindings, such as safety pins (Issue 11) or shoelaces (Issue 13). The first 10 issues of NMSD had no theme other than general autobiographical stories. The themes of subsequent issues included:

Widely praised for excellent layout and design, the Small Diary collection has been well received by reviewers and readers the world over. NMSD and MSD have appeared on the Favorite Zine list of the now defunct Zine Guide publication.

These zines have appeared in the following museum shows: Dark Matter at the Baltimore Museum of Art, 2004; Art of Zines at the San Jose Museum of Art, 2004; and Dear Diary: The Autobiographical Comic Book at the Athens Institute of Contemporary Art, 2006. The Small Diary zines have ridden aboard the Mobilivre-Bookmobile traveling library of independent publications that toured across North America. They appear in several library collections including ones in Denver, Seattle and Utah among others.