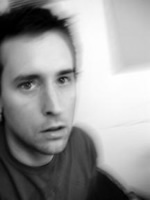 Kyle Bravo is a zinester and musician from New Orleans, LA. With his wife, Jenny, Bravo runs Hot Iron Press - a letterpress and silkscreen printshop, distributor of artists books, zines, comics, etcetera, and organizer of various DIY projects. He also contributes to zines, including Zine World: A Reader's Guide to the Underground Press and Factory Direct.

Bravo edited a collection of DIY articles into a book called Making Stuff and Doing Things, which was published by Microcosm Publishing. It was the book form of a zine that spanned 2 issues that he published in the early 2000's called How2 Zine. Kyle also ran a zine distro called How2 Distro at that time. He has also released the album Digging Myself Deeper on Valiant Death Records.