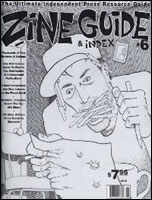 Zine Guide was a review zine published by Brent Ritzel (who also published Tail Spins). Ritzel described it as "Complete contact information for 1500+ zines and assorted independent publications. Complete contents, cost, pages, size, and production quality of all available issues of every zine listed. Indexes of bands, record labels, and all subjects/topics." With glossy covers and it's mammoth size, Zine Guide resembled a magazine in appearance, but it's content was an in-depth, cross-referenced directory of the DIY zine community.

In addition to zine listings, Zine Guide also encouraged readers to vote or rate their favorite and least favorite zines and included famous zinesters, band members and indie record label owners' lists of their favorite zines. The zine printed rankings from it's readers, including the top ten zines in various categories and the top 100 most popular zines. This practice caused some controversy and Zine Guide received (and published) angry letters about this practice. Regardless how one viewed the voting and rankings, for six issues between 1997 and 2004 Zine Guide served as an impressive resource and up-to-date directory of zines. Zine Guide's first issue came out in December 1997 and was followed three months later by the last issue #64 of Factsheet 5.