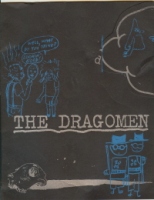 The Dragomen was a one off comic zine. It was written and illustrated by several zinesters and edited by Meredith Stern.

Some of the contributors included were Meredith Stern from Crude Noise and Mine zines, Mike Taylor of Scenery, Nicole Georges of Invincible Summer, Cindy Crabb of Doris, Ally Reeves of Another Chance, as well as eight others. The stories written by the zinesters were comprised of dreams, short anecdotes, quick experiences and thoughts. These were then illustrated by other zinesters which led to the development of different visual interpretations of the stories. Some of the comics are straight forward narratives while other ones are more surrealist. In the introduction Meredith explains that she assigned narrative minded writers the more abstract stories and vice versa and that the comic illustrators didn’t know whose stories they were illustrating. The illustrators edited the stories as they wished. The cover had a two colour screenprint of artwork inside and the zine was bound together by laces.