Scenery is published by Mike Taylor (ex-member of Palatka, Maximum Rock N Roll columnist). It equally features Mike's artwork as well as his personal writing. There have been issues released that consisted entirely of comics. The zine was featured in Volume Three of 1998's Zine Yearbook.

The first issue of Scenery was released in the summer of 1995 as a 32 page 8.5 by 5 zine. It was written in Gainsville, Florida. It contained Mike's distinctive artwork together with personal stories and journal entries. The third issue was released around June 1997 as a split zine with the third issue of Whew!. In that issue of Scenery there was an extended travel/tour diary which were illustrated. The eighth issue was again a split zine but with the second issue of Nervous Condition:Haili. Both writings and illustrations continued to be featured. The 14th issue of the zine was subtitled "Fire as a Metaphor" and the zine had a glossy cover and was professionally printed. "Fire as a Metaphor" was a thesis essay written by Rich Simpson and the 14th issue of Scenery was a sort of graphic novel presentation of the essay. The story deals with the city of Gainsville, Florida and how the city copes with and has been changed by the fact that it is host to the campus of the University of Florida. The essay was a sort of sociological study, exploring how punks relate to gentrification, art and culture. The 15th issue covered political topics with articles on the economies of social interaction and Joe McCarthy’s Ghost. The cover was a silk screen print.

Issues 7, 10, 13 and 15 were included in the 2002 tour of North America by the travelling library of independent publications, Mobilivre-Bookmobile. 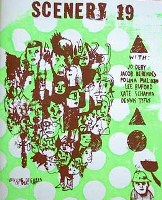 The 17th issue contained comics from contributers and a series of updates from a friend visiting Nepal. The cover was a three colour screenprint on good quality paper. The 19th issue was written in Providence and contained writings, comics, an interview with a graffiti artist. It was released in December 2006.

Scenery, and the art of Mike Taylor, was also featured in the exhibition The Copyist Conspiracy: An Exhibition of Zine Art. The show featured art work and pages from zines by a number of well known zinesters and was held in San Francisco in November of 2005.