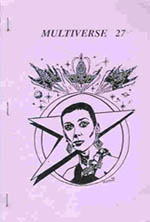 Multiverse is a media science fiction fanzine by Nikki White.

The first issue of Multiverse appeared in Australia in December 1979. It was a mimeographed fanzine that combined various media SF characters from Star Trek and Star Wars to create literary SF stories. Other television series and films utilized in the stories included Battlestar Galactica, Blake's 7, Dark Shadows, Doctor Who, and Forever Knight. 30 issues were published, the last issue appeared in in June 1999.

Issue 1 was completely done by Nicki White, but other fans began contributing as of issue 2, which was released in March 1980.

Beginning in 1982, Nikki White also published the Blake's 7 letterzine Centro, and in 1986, the Doctor Who letterzine Dodecahedron.