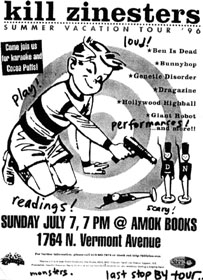 The Kill Zinesters Tour was an idea hatched by Bunnyhop publisher Noel Tolentino and Darby Romeo, publisher of Ben Is Dead.

The zine tour developed as a means of `trying to strengthen the zine community,' Tolentino said back in Summer of 1996. The tour included Tolentino and Romeo, Seth Robson (co-publisher of Bunnyhop), Dishwasher Pete, Dave Fubar from Yakuza, Jeff Fox from Hollywood Highball, Larry from Genetic Disorder, Joshua Glenn of Hermenaut and a few other zinesters joining the tour for legs of the trip. The plan was simple, rent a Winnebago and tour the States hyping zines, with assistance from local zinesters in each city, who planned, organized, hosted and promoted each event.

Months before the tour took place a lot of controversy sprung up throughout the zine community, especially on alt.zines, the dominant forum for all things zine-related throughout the 1990s. While the tour capitalized on the national attention focused on zines at the time, it also brought out a clash in egos withing the zine community. In the end, most of the prominent zine publishers in each city of the tour helped organize their leg of the event and hundreds, if not thousands, of zines participated in the 18 different zine conventions and events.

Socially Fucking Retarded was published after the tour and includes many of the details that went into planning it, as well as an in-depth diary of the Kill Zinesters Tour.