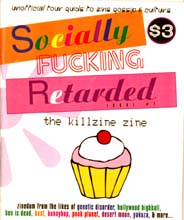 Socially Fucking Retarded was a one-shot zine following the planning, backlash against, and execution of 1996's Kill Zinesters Tour published by Darby Romeo (Ben Is Dead), with contributions from Larry from Genetic Disorder, Dave Fubar from Yakuza, Jeff Fox from Hollywood Highball, Chip Rowe (The Book of Zines), Lorraine (the merch girl for the tour) and more. Subtitled the "Unofficial Tour Guide to Zine Gossip and Culture," this 80-page zine captured a moment in time when zine culture had exploded around the U.S. and was getting it's 15 minutes of fame in the mainstream. With that came a clash of zinester egos, which is in part documented in Socially Fucking Retarded.

In the introduction Romeo said, "We think the title is self-explanatory, especially if you work in the 'zine industry' yourself. If you don't, or are the defensive type, it's just meant to express that on average, these obsessive compulsive zine producers are often so because they are too socially retarded to do anything else. Or do you just become that way once you work on a zine? So the double blind test results have not quite come back from the lab..."

The contents included:
-A critique of R. Seth Friedman of (Factsheet Five) including reprinting of a long post of his from alt.zines
-A lengthy discussion on zine distribution with Tom Lupoff (Big Top), David Hirschi (Desert Moon), and Daniel Sinker (Punk Planet)
-A huge multi-zinester recounting of the Kill Zinesters Tour broken down by city and including photos and stories of meeting most of the prominent zinesters at the time
-A breakdown on the expenses and problems of the tour
-Email exchanges and posts from the alt.zines arguments about the tour
-Lengthy lists of zine resources circa 1996