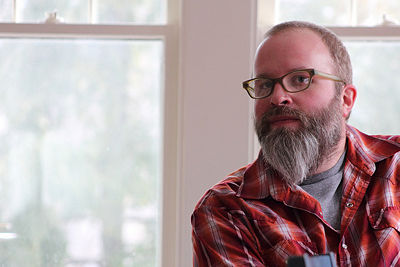 Dan Sinker was the main editor of Punk Planet.

Sinker was born in London around 1975 and moved to Chicago at the age of three. He studied at the School of the Art Institute in Chicago and in 1994, at the age of 19, he started Punk Planet. Sinker started Independents' Day Media in 2003 as the parent company of Punk Planet. The first title from Independents' Day Media was a quarterly magazine, Bail, which was designed for older skateboard enthusiasts. Punk Planet Books started shortly afterward. Punk Planet ceased publishing in 2007.

Sinker has won several awards, including a Firecracker Alternative Book Award in 2001 for his book, We Owe You Nothing: Punk Planet, the Collected Interviews. For his work at Punk Planet, he has been repeatedly recognized by the Utne Alternative Press Award with 14 award nominations and two wins in 2000 for general excellence in "zines" and in 2002 for his cultural/social coverage. Sinker also won Chicago Magazine's "Best of Chicago" award in 2005 for "Best Zine."

One of Sinker's mottos is: "If you are a zine, you have to come out on a regular basis."

Since 2004, Sinker has taught in the journalism department at Columbia College in Chicago, with a focus on entrepreneurial journalism and the mobile web. He is occasionally blogs (about media) at the Huffington Post. He also founded CellStories, a site that offers fiction for mobile devices.

In Fall 2010, Sinker created the satirical @MayorEmanuel, a Twitter account caricaturing Rahm Emanuel and his run to be mayor of Chicago. @MayorEmanuel captured more than 44,000 followers with its profanity-laden tweets. Sinker was revealed by The Atlantic as the account's creator and author about a week after the 2011 mayor's election, leading to Sinker appearing as a guest on The Colbert Report on March 8, 2011.