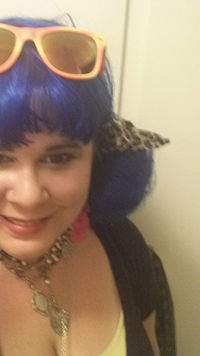 Kari Tervo is a zine-maker who lives in California, U.S.A.

Tervo was raised in the remote Upper Peninsula of Michigan, U.S.A. She grew up in Dodgeville, MI (pop. 500), where she created Shards Of Glass In Your Eye! in 1995. She attended the University of Michigan, where she majored in psychology. She earned a Ph.D. in clinical psychology from the University of Maryland in 2004, where she concentrated on research in schizophrenia and neuropsychology. She is currently a clinical/forensic neuropsychologist and zine-maker.

Until January, 2014 she appeared to be constitutionally incapable of writing a zine without an exclamation point in the title. It just seemed like they were called for.

"Kari is a zine phenomenon." --The Vellum Undergound, January 2016.

Shards of Glass In Your Eye! (this page includes reviews)

No Condoms, No Piece!

Welcome BACK to Redondo Beach!

The Spring, 2011 issue of Photocopy Press re-printed Tervo's body-image essay, "In Defense of Thin Women," in its entirety. The essay had previously been published in Shards of Glass In Your Eye! #3.

The June, 2013 issue of Xerography Debt (#34) included a column by Kari Tervo called "Trader Schmoes." The column discussed zine-trading etiquette, and ended with a public service announcement in the form of a rap song.

Gag Me With A... #9 (August, 2013) by Deirdree Prudence and Steven Hughes Purkey (aka MC Sunflower Jones Productions) included a poem by Tervo entitled "Sizzle Trap."

Selfie Zine (release date TBA) by the People of Color Zine Project will include an essay by Tervo entitled "In the Right Light."

The Summer, 2014 issue of Xerography Debt (#35) included an essay by Tervo entitled "Zinethropology."

Tervo is a member of the public-speaking group, Toastmasters, International. She has served a number of functional roles and has won several club awards for her prepared and impromptu speeches. In May, 2013, she gave a prepared speech about zines entitled "Zines 101: Welcome to Your World." In August, 2013, she won a Toastmasters Best Speaker award for a speech based on "Public-Speaking Smackdown!", a piece in Shards of Glass In Your Eye! #10. Other creative interests include participating in poetry readings and engaging in elaborate lottery fantasies.

Zines for Troops! collects zines and sends them to military members and injured veterans. The project operates under the auspices of non-profit organization Operation Paperback, which provides free reading materials to U.S. military members worldwide. People who donate zines receive two custom 1" buttons and their name on an Honor Roll on We Make Zines.

Tervo was in the Ask A Zinester booth at Skylight Books, in the Los Feliz neighborhood of Los Angeles, on May 3rd, 2014.

In October, 2013, American Express named Tervo a Grand Prize winner in its Passion Project contest for her submissions on Shards of Glass In Your Eye! and Zines for Troops!

In November, 2013, Tervo was a featured entrant in the Dr. Martens Stand for Something contest.

In April, 2015, Tervo was the Featured Poet at Redondo Poets. She presented a variety show of jokes, poems, and essays, some published in Shards of Glass In Your Eye! and other zines.

In September, 2015, the American Amateur Press Association honored Tervo with a Laureate Award for Best New Journal for Stovetop Girl: She's on Fire.