Shards of glass in your eye! 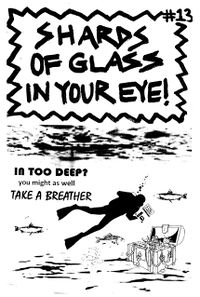 Established in 1995 by Kari Tervo, Shards Of Glass In Your Eye! is a humor + random zine (as described by the author) featuring offbeat insights from an unconventional observer. The series currently has 13 issues.

Shards of Glass In Your Eye! received its first review in July, 2011. Sofia of Weatherfield opined about #4, "I did like it quite a bit; it seemed, to me, exactly like how I imagined a zine would be."

In Spring 2011, Elizabeth at Photocopy Press reviewed Shards of Glass In Your Eye! #3. Elizabeth reported that she enjoyed #3 and "honestly laughed out loud at a few parts." Tervo's essay "In Defense of Thin Women" was re-printed in its entirety in the Spring 2011 issue of Photocopy Press.

In February, 2011, Kathy Mosely of Xerography Debt reviewed Shards #3 and #4. Ms. Mosely described Shards as "a true potpourri zine with a heavy dose of snark."

In August, 2011, Joe Biel of Xerography Debt reviewed Shards #3. Mr. Biel said about Tervo's old-school cut-and-paste approach, "Kari brings back the 90s in this zine's format, but I have to wonder if the bar shan't be raised. . .I believe one should be challenged by the zine-making craft. . ."

In August, 2011, DJ Frederick of One Minute Zine Reviews reviewed Shards #5. He said in his audio review, "Kari Tervo has written an incredibly funny zine. . .I love zines that get this creative."

In 2011, Sarah Bennett of LA Record reviewed Shards #3 and #4, and said, "Tervo's fuck-it-all attitude is welcome in this world of polished computer-designed rags. Thanks to Atomic Books for motivating Tervo to cut, paste, and photocopy her reflections into a black-and-white half-pager. . ."

On September 5, 2011, P.C. Ferguson wrote about #5 in North Beach Notebook, stating about her experience at the 2011 San Francisco Zine Fest: "My favorite [zine from SF Zine Fest] has to be Shards of Glass in Your Eye! by a woman named Kari Tervo who lives in LA. Here's one of her 'homeopathic cures' listed on the inside cover: 'For Naivete: Place a magical amulet under your pillow. It will strengthen your critical thinking skills.'"

In January, 2012, Elizabeth of Photocopy Press wrote regarding #5, "Kari explains her love for the last page of magazines and decides to try and make issue #5 a whole zine of 'last pages.' Kari writes her zine with a witty sense of humor. . ."

In April, 2012, Kurt Morris of Razorcake wrote about #6, "It's done in a cut and paste style reminiscent of how I did my zines back in high school and how I really feel like all true zines should be done...This makes for good toilet reading as well as a nice pick me up when you're feeling a little down." This bit from #6 was featured in Razorcake as a pull-quote: "Dear Diary: Earlier, I stabbed my finger right through with my cat's insulin needle. This is how super-powers begin. I bet I'm going to turn into a puma."

In May, 2012, Josh Saitz of Negative Capability said in an interview, "I am also into a zine called Shards of Glass in Your Eye! by Kari Tervo. She's fucking hilarious. . ."

In June, 2012, reviewer mishap of Zine World wrote about Shards #5, "Ah, that rare bird: a humor zine with a personal bent. . .intersperses jokes, absurdities, and other fun. . .Check this out."

In July 2012, YouTube reviewer Billy said of Shards #6, "She's got a funny sense of humor, there's nothing that's too deep. . .a funny, sarcastic zine."

In the Golden Jubilee issue (#50) of The East Village Inky, Ayun Halliday wrote about Shards #6, "Another extremely funny zinemaking lady!. . .She talks scat about DIY joints ("the whole point of the Beverly Hills mystique is that you are not doing it yourself. This is a scourge upon the neighborhood")...[Kari] is at her most hilarious in the fortune cookie fortune-sized entries entitled 'Reminiscing'..."

Celebrity news journalist Michael Musto of The Village Voice said in a personal communication that Shards #8 is "lots of fun."

Eggplaid of the venerable independent publication Slingshot wrote about Shards #7, 8, and 9 in the Summer 2013 issue: ". . .Wicked intelligent. . .An awareness of an actual audience [with a] tickle spot. Kari touches that spot with reckless abandon."

Ken Bausert wrote in Xerography Debt (#33, June, 2013) that Shards is "whimsical, irreverent, and totally unpredictable. . .[Kari] has a warped sense of humor and a vivid imagination. Always a fun read."

In September, 2013, DJ Frederick of One Minute Zine Reviews wrote about Shards #10, "This issue brims with Kari's wit and celebrity sightings."

In September, 2013, longtime zine-maker Kelly Dessaint wrote on his zine review blog, Zinesiread, "Shards of Glass In Your Eye! is a fun perzine that doesn't take itself too seriously. . .[Shards is] quite charming."

In September, 2013, Dave Brainwreck of the esteemed punk publication Razorcake wrote about Shards #9, "This is a breezy humor zine. . .Kari applies a sharp sense of humor to the eternal weirdness of her location. . .All in all, a very enjoyable, quick read." The print edition of that issue of Razorcake featured a "diary entry" from Shards #9 as a pull-quote: "Dear Diary: I just finished watching a PBS documentary. There's nothing like a rock-climbing congenital amputee to make you feel like shit about yourself."

In December, 2014, Davida Gypsy Breier of Xerography Debt said about Shards #12, "This is just silly, and I mean that in the best way. . .lots of visual jokes, puns, observations, and Los Angeles-centric moments. . .Fun!"

In Winter, 2015, Foggy Bottom Press wrote about Shards, "Offbeat observational humor. . .light-hearted fare with amusing one-liners. . .This is stuff for when you need a break from the heavy stuff and just need a friend with a wacky sense of humor to take your mind off things for a little bit."

In January, 2016, The Vellum Underground wrote about Shards, "It's worth looking for. . .It's silly, it's funny, it's entertaining."

In August, 1995, the Five-College Discordian Society of Saint Rufus named Tervo a Pope in the House of the Apostles of Eris for Issue #2 of Shards, particularly the "Special Middle Page Randomness Spread." Her resulting member name is Pope of Pink Lemonade.

In October, 2013, American Express named Tervo a Grand Prize winner in its Passion Project contest for her submissions on Shards and Zines for Troops!

In November, 2013, Tervo was a 2014 LA Zine Fest featured exhibitor in their "Get To Know Your Zinester" series.

In April, 2015, Tervo was the Featured Poet at Redondo Poets. Part of her program included jokes and essays from Shards.

Kari Tervo attended the 2011 San Francisco Zine Fest, September 3-4, 2011 bringing with her issues 3-5, and distributed buttons that she designed that said, "Be Your Own Subculture," the tagline on the back of Issue #5. At the 2012 LA Zine Fest on February 19, 2012, Tervo distributed issues 3-6 and gave away Be Your Own Subculture buttons. At the 2013 LA Zine Fest on February 18, 2013, Tervo planned on trading issues #3-#8. However, the line wrapped around the block. Unable to enter the venue, she distributed all the copies (including two Compleat Humour Paks) to the people standing outside in line. Some appreciated Shards for helping to pass the wait time, and some for the makeshift sun umbrella. Tervo sold a number of zine titles and collected Zines for Troops! donations at the 2014 LA Zine Fest on February 16, 2014.

Zine Exhibitions Showing Shards of Glass In Your Eye!

Bookstores That Carry Shards Of Glass In Your Eye!

Libraries That Carry Shards Of Glass In Your Eye!