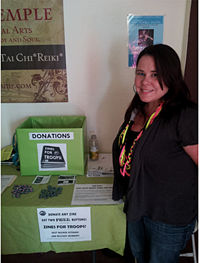 Zines for Troops! is a volunteer project managed by Kari Tervo. Its purpose is to donate zines to United States military members and injured veterans in order to promote effective leisure time. Additional goals are to increase understanding among U.S. citizens and to show military members the personal work of citizens they enlisted to defend. Zines for Troops! operates under the infrastructural auspices of Operation Paperback, a non-profit organization.

Conceptualized in March, 2013 by Tervo, Zines for Troops! has collected over 400 zine donations to date. Contributors are located throughout the United States and Canada. Zines have been sent to military locations around the world.

Donations have represented a varied spectrum of zines. They fall into general categories such as perzines, travel, comics, poetry, technology, sexuality, health, and more.

Contributors receive two custom 1-inch buttons and their name on an Honor Roll on We Make Zines.

On September 7, 2013, DJ Frederick of One Minute Zine Reviews wrote about Zines for Troops!, "One of the cool things Kari is doing is spearheading (ouch!) an effort called Zines For Troops for active duty military and veterans. This is a very cool idea - send your zines to Kari Tervo, Zines for Troops!, P.O. Box 7831, Beverly Hills, CA 90212."

On February 9, 2014, Josh Medsker of Twenty Four Hours Online posted an interview with Tervo about Zines for Troops!

Additionally, Kari and the Zines for Troops! donation box occasionally travel to zine fests. Look for the bright green box.

In October, 2013, American Express named Tervo a Grand Prize winner in its Passion Project contest for her submissions on Zines for Troops! and her humor zine, Shards of Glass In Your Eye!