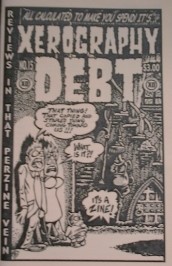 The cover of issue 15

Xerography Debt describes itself as "the review zine with latent perzine tendencies." It is edited by Davida Gypsy Breier. All of the reviewers are zinesters themselves, and are allowed to write about zines of their choice in the style of their choice. Xerography Debt also features news and opinions concerning the small press at large.

Xerography Debt had its debut in 1999. Since that first issue, some of the writers for the zine have included Eric Lyden, Kathy Moseley, Donny Smith, Josh Medsker, and Jeff Somers. In the past, Gianni Simone has written a column about mail art. Artists whose work has been featured on the cover include Bobby Tran Dale, Matt Fagan and Androo Robinson. Issue twenty-two came out in August of 2007.

Selections from Xerography Debt were reprinted in volume nine of Zine Yearbook, published in 2008.

The zine was formerly known as Xerox Debt, but changed its name in response to threats from the Xerox Corporation. 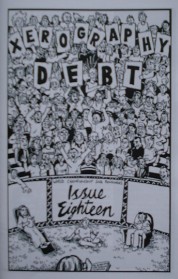 The cover of issue 18