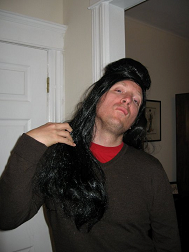 Josh Medsker is a zine editor from the U.S.A.

One of his first titles was the punk zine Noise Noise Noise. It was published in Anchorage Alaska from 1994 till 1996. Eleven issues were released during those years. In the spring of 2010, he revived NNN, with interviews from national (and international) bands such as: The Raveonettes, Pillow Theory, Scott H. Biram, and others. Josh also transcribed most of the old NNN interviews onto the blog, so they would be more readily available.

His next zine, Twenty-Four Hours was begun while he lived in Japan and continued upon his relocation to Austin, Texas, and finally, New York City. This literary zine has featured fiction, interviews, comics and poetry, with contributions from fellow zine makers such as Ben Brown, Tim Doyle and Ben Snakepit.

One of his most current zines is Teach, an autobiographical comic about his life as a teacher and writer in New York City, which he's published since the summer of 2009. In December 2011, Josh rolled Noise Noise Noise and Teach into Twenty-Four Hours, for a bigger, all-purpose zine.

He is currently working on turning Teach into a series, which incorporates college syllabus materials and teaching materials with zine features and a zine-y feel.

In 2003, Josh Medsker, with the help of Zach Vowell, founded the Austin Zine Library. It consisted of 4,000 to 5, 000 titles. He handed the reins over to Cheetara Thundercats upon his departure for New York City.

Josh Medsker has written for a number of publications, such as Maximum Rock 'N' Roll, the San Francisco Bay Guardian, Anchorage Press, andFriction.

He has also taught classes on zine-making at ABC No Rio and Adelphi University in New York, and at the University of Texas at Austin.