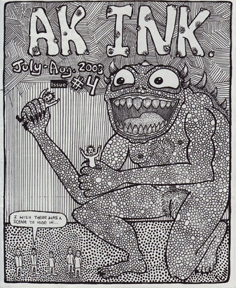 AK Ink was a punk rock music scene zine put out in Anchorage, Alaska from 2002 to 2006. It consists of 19 1/2 issues. The zine was known for its interviews, music, film, beer and show reviews, and also included art, comics, short stories, poetry, offensive horoscopes, and whatever else people wanted to contribute. It was created as a way to support the Anchorage music scene, and serve as a creative outlet for creator and artist Jennifer Gray. It also functioned as a forum for collaboration and creative contribution from the local community, as well as a way to document the scene. While it was initially intended to be a web-based zine, the fun of physically cutting and pasting the zine together took hold, and thus it became a staple publication. The zine was published every two months, both in print and on the web. Ak ink was open to all contributions and while it focused on the local Anchorage scene, the support from the national and international punk and alternative community became incorporated as a steady part of the zine.

Jennifer served as editor, producer and enforcer of contributions. Her boyfriend Myk Gray headed the music review department while also contributing to scene documentation and design. Funny man, and close friend, Chris Coleman, headed the film review department and also contributed with interviews, show reviews, and miscellaneous assignments. Jennifer, Myk, and Chris were also co-workers in a cold Alaskan warehouse where they all worked with their backs for low pay. The No Future philosophy embedded in manual labor and workplace disgruntlement fueled the working class aspect behind AK Ink. Myk Gray and Chris Coleman were also involved in the music scene as the guitarist and the drummer for the local punk band StuntCock. The zine included many artists and musicians as contributers, as the zine was focused on the community.

Because AK Ink was founded in punk rock, and more specifically in intentionally offensive, politically incorrect, scatologically inclined, low brow humor, some found the zine offensive. This is credited to Jennifer's personal interest in crass humor, and her lack of interest in censoring the contributions of others. While she takes full responsibility for all offensive remarks, she attempted to counter the rude approach by including all types of opinions, views, and counter remarks as part of the zine to represent the full spectrum of ideas and opinions from all AK Ink contributors as well as those with an affinity towards punk publications.

What AK Ink became after years of promoting and refining, was an invaluable documentation of the local Anchorage scene and punk community ranging from 2002 to 2006 with contributions firsthand from the scene itself.

Ak Ink's demise came in the spring of 2006 when Jennifer's interest in creative output demanded further attention to formal training in the arts. She ultimately quit the zine to finish her BFA. School to Jennifer was also an escape route from a future of hard labor. In the middle of issue 20, with half of the zine already posted online, and after a still unpublished Dead Kennedys interview, she abruptly quit the zine to attend to personal matters. The paper copy of issue 20 was never released. While notice of the decline of AK Ink was announced, submissions and contributions continued to pour in the mail until the PO Box was officially closed. To this day a large basket of contributions and submissions sits untouched waiting for retribution and review. The amount of contributions AK Ink had received testifies to the extreme support that the punk community has for each other. Because the online zine became defunct without proper backup, part of issue 20 is now lost. Jennifer's future intent is to re-release issue 20 and include reviews of all the lingering contributions and submissions. This will finalize AK Ink's existence and close the door on that chapter of scene documentation.

Jennifer's current interest has shifted to fine art, while incorporating aspects of punk rock and the zine culture. Her 2011 Thesis 'Rise Above' highlights this interest in a zine inspired collage of punk drawings and hand drawn typography. Her current work is also derived from these passions. Myk's interest in design saved him from a life of back labor, and with a portfolio that included design work for AK Ink, he secured a career as a graphic designer. Chris has also left the manual labor field to pursue a career in stand-up comedy and radio. His wit, which was exploited in AK Ink, has finally been put to good use. Notable and reoccurring contributors to the zine include Herbert Haygood (aka Wrick Luv, Wricky Bee, and Richie), Nathan Anderson (N8O), Angie Winfield, Elisa Honsacker, Ryan Murdock, Shane St. Clair, Ted Kim, David Broadway (Frenchy), Love Nut, Josh Medsker, Kara Simon, Michael Shaeffer, Matthew Johnson, and many many more.

Music reviews of Guff, The Controls, Faction, Amazombies, Capture the Flag, The Kinison, Loose In Eight, DRI, and Verbal Abuse. Crs’s film reviews of Logan’s Run, Lame, Stezzin For No Reason, Kill Bill, Being Your Own Boss, and The Show Must Go Off Alkaline Trio. Got Mosh?! Show review on September 21st 2003 at the Lion’s Den in Eagle River by N8O. Poetry. Lambic beer review. “The Walk” Story of Angie and jenn. Exclusive bonus addition sticker page in the center of the zine. Fat’s Tuna Melt interview by N8O. BlackOut interview. The Twelve Days of X-Mas photo comic with Chris Coleman. Koots show review on October 22nd 2003 with Sensory Dep, and Hammerfist by Crs. Sensory Dep Interview by Crs. Offensive horrorscopes and misc.

Music reviews of Vic Bondi/Articles of Faith Split, Thrall, DutchToon, 16 Hour Drive, Duck Hunts, American Made, Live For Today, EuVusahm/Billy Dirt Cult Split, A Good Name for a Band, 3 Wheela, and Fats Tuna Melt. Crs’s film reviews of They Live, The Warp Tour Presents: Punk Rock Summer, Haggard, The Show Must Go Off: GutterMouth, and Shakedown. Interview with Dan LaPan of Subterranea by N8O. Beer review by Mike Beer of Beer City Records. Center of zine consists of a board game called “Go to the Show!” with an additional attachment of board game pieces including cards to draw from and cut out punk characters, which are pieces for the game. Short stories, misc. Loud & Heavy show review by N8O at the Kincaid Annex with Loose In Eight, Subconscious, and SpitShine. EuVusahm/Billy Dirt Cult Split Record Release show review at Mammoth Music on Dimond. Vally Bistro show review November 28th, 2003 with The Fresh Raspberries, StuntCock, SpitShine, and Copia. Offensive horrorscopes and misc.

Intro. Letters to the editor. Myk’s music reviews of Artimus Pyle, HateWork, Impulse Manslaughter, Flying Falcons, and Sunday Morning Einsteins. Crs’s movie reviews of Bubba Hotep, The Show Must Go Off #12: Zebrahead, & #13: Bleeding Through, Seacret Weapons of Kung Fu #2, and Fahrenheit 9/11. A Face in the Crowd show review for Eagle River’s Skate Park Fund Raiser at Lion’s Den on May 22nd 2004 with SpitShine, StuntCock, Brothers Contra, and Misnomer. Bitoz in Back show review at Bitoz by CRS with X’s for Eyes, Brothers Contra, and SpitShine. Sticker page in the center of the zine. Tesoro Sports Center show review by Amanda with SpitShine & StuntCock. JENN-RA The Red Advenger comic by jenn conclusion. Girly Shots alcohol review by Amanda. DIY Clothing Projects by Sarah. Flying Falcons interview by CRS. HorrorScopes and other Verbal Abuse by N8O.

Cover by jenn. Intro. Music reviews by Myk & Shane of The Strap-Ons, Caterpillar Tracks, All or Nothing HC: What Doesn’t Kill You, On The Rag Record: Put Some Pussy In Your Punk comp, DRI: Live at CBGBs 1984, Broken Bones: FOAD, The Inoculators: Dropped Their Brains, Humans Bow Down: A Mirror, PONG: Bubble City, JADED52: Opportunity, Fat Day: Snarl of Pulchritude, Paint By Numbers: Plastic, BullDozer: Trouble Maker, Verses The World, The Very Foundation: Small Reserves, and Heath Berg: Rolling Echoes. Film reviews by CRS of The Show Must Go Off! #18: Dance Hall Crashers, Punk O Rama 10, Atom and His Package: Hair: Debatable, and jenn’s review of The Show Must Go Off! #19: Bouncing Souls. Interview with StuntCock about new album: Geographically Fucked by jenn. HorrorScopes by jenn. Misc. Christian Slater Gets Another Visitor poem by Michael Shaeffer. Fat Tour Alaska by CRS with The Soviettes, Smoke or Fire and Against Me! Interview with skateboarder Danny Atkins by Ted Kim. Marlboro Man story by Matthew Johnson. Rant #907 by Katio-O. Police Brutality Protest show review 10/22/05 in Honolulu Hawaii by Keith with Bathe in Red Iodine, Cracked Skull, Hell Caminos, Black Square, 86 List, Shoko Kono and Extra Stout. Misc. Paris Is Burning story by Frenchy. Show review at Bitoz 10/8/05 by jenn with Seasons of Murder, SpitShine, StuntCock and Josef and the Stalenites. Chris Beaver’s CD release show: Sinney Heart at Noble’s Diner 10/13/05 by Wrick Luv. Why Can’t Bands That Play Shows Knock Off All The Songs About Feelings And Bullshit And Play Songs That The Crowd Can Relate To? poem by jenn. My Beer Story by Tippy McStaggers. Belgian Beers Pop Quiz. Back cover by jenn.

Intro. Music reviews by Myk, Shane, Ryan and CRS of Cab Assassin, Grounded: Revolution Jukebox, Make Out Music: Segrenation, The Vandals: Shingo Japanese Remix Album, Greyday Records: 20 Nights of Wine and Song, The Sweethearts: Looks Could Kill, Fenix TX: Purple Reign in Blood, Louis James: So Unreal, Green Carnation: The Acoustic Verses, Brunt Of It: Certain Uncertainty, Colonial Excess: Mute, and The Bodies: Addicted To You. Misc. Film reviews by Jodie of Between Resistance & Community: The Long Island Do It Yourself Punk Scene and The Edukators, and film review of DRI: Live at CBGBs 1984 by jenn. Misc. Letter and short story: Reactions by Joel Kopical. Beer Review by jenn. Misc. As Sin short story by Matthew Johnson. Misc. Back cover by jenn.