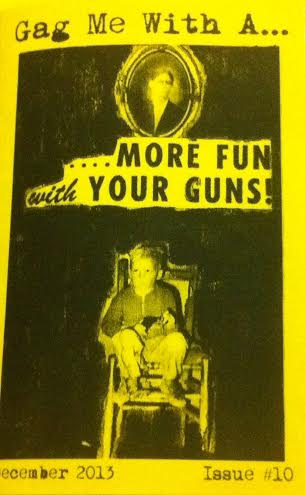 Gag Me With A... is a zine by Deirdree Prudence and Steven Hughes Purkey.

Gag Me With A... is published in Long Beach, California, U.S.A. The first issue of this black and white photocopied literary zine appeared in February 2011 with the most recent issue, its 10th, released in December 2013. The editor states that it was, "created to bring writers and artists together..." It seeks to bring. "...a broader knowledge of the international counter-culture scene through reviews, short stories, deliciously eccentric true like stories and adorably strange mythologies..."

Comics are by Luna Blue.

Gag Me With A... is currently in production for it's eleventh issue, the 11:11 issue, running with the theme of "Paranormal & The Occult". It is due out in May 2014. To see about getting a copy, submitting to future issues, or general fanmail...please email: GagMeWithA@ZinesAndShit.com

Deirdree Prudence & Steven Hughes Purkey also co-edit the Pocket Reader series mini zines, along with many other one-offs & whatevers that strike their fancy. Together they create under the glitzy banner MC Sunflower Jones & find little time to do anything else... Their zines can be found at www.MCSunflowerJones.com or www.MCSunflowerJones.Etsy.com