From ZineWiki
(Redirected from Verbicide)
Jump to navigationJump to search 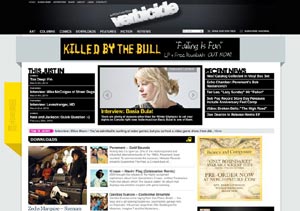 Verbicide Magazine is an independent entertainment website published via Scissor Press by founding editor Jackson Ellis and creative director Nathaniel Pollard. VerbicideMagazine.com was launched on August 1, 2009 as a successor to the defunct print publication of the same name.

The music focus of Verbicide has generally been on punk and indie rock, though as of late 2005 it has included hip-hop coverage as well.

Verbicide was founded by Jackson Ellis in New Haven, Connecticut in 1999.

The first issue came out in September 1999. Most of the writing was done by Jackson, Christopher Connal, and Leanne O’Connor, who drew the first issue’s cover artwork. It was a cut & paste photocopied half-sized zine.

In October 2000, Verbicide issue two (another cut-and-paste zine) was published, and on election night, November 7, 2000, Jackson met Douglas Novielli through Chris Connal at a Rancid show in Boston. Doug ran a literary webzine, Terraspatial, and Scissor Press was quickly formed as the media company “umbrella” under which a number of projects would be produced.

In June 2001, issue three of Verbicide was published. It was 48 pages of newsprint with a black and white cardstock cover, the first professionally printed issue. The press run was 1,000 copies, and Verbicide made the leap to becoming a full-time endeavor. 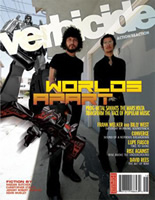 After working with Jackson for two years as co-editor and co-publisher, and helping to bring Verbicide from a handmade zine to a nationally-distributed magazine, Douglas Novielli stepped down from Scissor Press in April 2003, several weeks before the release of Verbicide issue eight.

Verbicide was released annually in 1999, 2000, and 2009, and biannually in 2001, 2002, and 2004. Three issues per year were published in 2003, 2005, and 2006, and it was published quarterly in 2007. The press run peaked in July of 2007 with a single-issue press run of more than 25,000 copies. Verbicide was circulated for free in New York City, Los Angeles, Austin, San Francisco, Philadelphia, and Boston/New England (via Newbury Comics), as well as in limited amounts in New Haven, Portland (OR), Rochester, Bloomington, at zine conferences in Montreal and Detroit, and via Books To Prisoners.

In March of 2009, the 25th and final print edition of Verbicide was released, and the magazine was relaunched online on August 1, 2009.