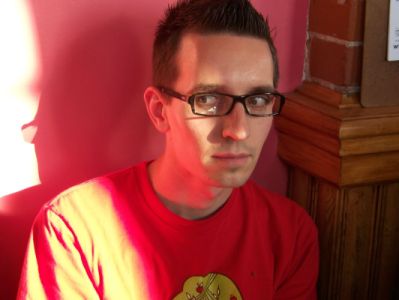 Born in Toronto, Ontario, where he lived until age fourteen (when he moved to the suburbs of Oshawa), he discovered zines via the indiepop community, with first purchases and inspirations including Bottle Rocket and Wrap Your Troubles In Dreams.

Yard Sale! and other zines

Pageot created his first zine, an indiepop fanzine entitled Yard Sale!, in May of 2009. A second issue followed in August, as well as a listzine called 100 Things I Love in October.

By this point, more exposure to zines (and a trip to Portland, Oregon) had broadened his understanding. Not fully comfortable creating a pop fanzine, Pageot's introduction to the zine Kissoff convinced him that what he really wanted to make was a perzine.

Yard Sale! #3 came out November 2009 and featured a switch from half-page to quarter-page sizing, a noted content shift from fanzine to perzine, and a loose theme on the topic of autumn.

The preceding July had seen Pageot start an arts collective called Broken Arts in Oshawa. This led to the publishing of a zine manifesto for the collective in November as well as the launching of the Broken Arts Fair, a zine/craft fair. Broken Arts would also wind up running a series of zine workshops in Oshawa at various coffee shops and libraries.

January 2010 saw the publishing of Super Cool Awe Some, a zine documenting Pageot's writing from age 5 to 15.

Dear Jen, a series of letters written from Pageot to a girl named Jen, was published in May and Broken Arts' first anniversary in July was celebrated with the zine Broken Arts: Year One which documented the entire first year of activity for the collective. Yard Sale! #6 - the "summer" issue - was a 24 Hour Zine Thing entry and came out in late July.

In August, Broken Arts launched their own zine distro and Summer Tears, the first issue of a six-issue minicomic series written by Pageot and drawn by Andrea Manica, was published late August 2010.

The Remnants was an ongoing slice-of-life/superhero comic that Pageot had been writing for over a decade. With difficulty finding an artist to collaborate with Pageot made the decision to reformat the series into prose instead. The lit-zine The Remnants - Chapter 1 was released September 2010.

Yard Sale! #7 - the "school & work" issue - and Why I Don't Eat Meat, a compzine edited by Pageot featuring interviews with vegetarians both came out in October 2010.

The Remnants - Chapters 2 & 3 was published in December 2010 and the second Broken Arts Fair was held with vendors including Broken Pencil, Ian Sullivan Cant, Andrea Manica, and the Broken Arts Zine Distro.

2012 saw issues 3 through 5 of Now Or Never published while Yard Sale! took on a daily-diary theme as seen in issues 13 through 16.

Yard Sale! continued through 2013, frequently documenting Pageot's life as he launched his own record label, Fallen Love Records. Fallen Love would launch their own zine series Secret Gardens in the spring of 2013, while he stepped down from Broken Arts that fall.

Contributions To Other Zines