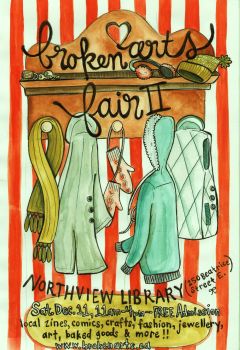 The Broken Arts Fair is a semi-annual zine/craft fair held in Oshawa, Ontario, Canada. Organized by Broken Arts, a local arts collective that also runs concerts, zine workshops, and public games, and run by Broken Arts founder Harley R. Pageot, there have been two installments of the fair to date.

Broken Arts was founded in July 2009 out of an initial zine workshop run by Pageot. As the group branched out into running concerts and other events a decision was made to run a zine fair in spring of 2010.

The first Broken Arts Fair was held on March 10, 2010 at a public library and featured zines from Pageot, Andrea Manica, The Toronto Zine Library, Rachel Chepsiuk, and Dani Crosby as well as DIY art, clothing, comics, and jewelry. The event also featured a drawing workshop and zine and poetry readings. The event poster was created by Maranda Elizabeth.

The second Broken Arts Fair was held on December 11, 2010 at a different public library and featured zines from Pageot, Andrea Manica, Ian Sullivan Cant, and Broken Pencil as well as cards, crafts, clothing, photo prints, and vegan baked goods. The event poster was created by Manica.

The third Broken Arts Fair is scheduled for July 15, 2011 as part of a weekend-long series of activities celebrating Broken Arts' second anniversary. Vendor registration is expected to open sometime in the spring.

Due in large part to the success of the Broken Arts Fairs, Broken Arts has started its own zine distro which promotes and sells zines at all of its events in Oshawa as well as at zine fairs throughout southern Ontario.

The Broken Arts Fair is intended to continue on a semi-annual schedule every July and December.