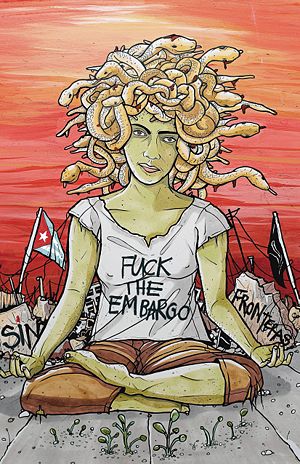 Cristy Road is a Cuban-American zinester and graphic artist originally from Miami and living in New York. She wrote the perzine Greenzine and has published a series of books and graphic novels.

Greenzine began in 1997 as a Green Day fanzine, but gradually became a perzine about Road's various homes of Miami and Philadelphia, racism in her communities, the strength of her friends, coming to terms with assault, gender, sexuality, and identity and more. The final issue, #14, was published in 2004.

Road has contributed her illustrations to a number of zines and books, notably Support, Razorcake, Maximum Rock'N'Roll, Pressed Between the Pages, and My Mother Wears Combat Boots: A Parenting Guide for the Rest of Us. She frequently does artwork for high profile radical and feminist magazines like Jane, Left Turn, Bust, Bitch, and The Progressive, organizations such as the Young Women's Empowerment Project and Homoground, plus cover art for several punk albums. In 2012 she participated in the POC Zine Project (People of Color); the Race Riot! Tour, a tour of zinesters of color; and Sister Spit: The Next Generation, an all-queer spoken word road show. As well, she has participated in the Zinester Podcast program, reading her work, and is creating art for a tarot deck with Michelle Tea. She also plays guitar and sings in the punk band The Homewreckers.

Contributions to Zines & Other Publications