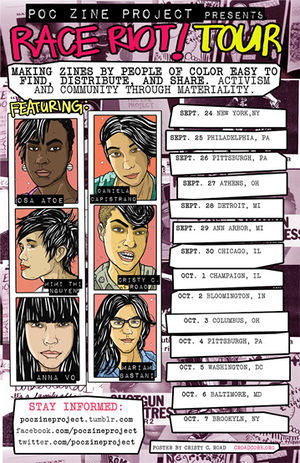 The POC (People of Color) Zine Project is an organization of zinesters who identify as people of color (POC). The group was first launched in January 2010 in an effort to preserve zines by people of color and make them available to other POC, researchers, historians, punks, and anyone else who has an interest in DIY publishing and underground communities.

According to its website, the mission of the POC Zine Project is to makes zines by POC (People of Color) easy to find, share and distribute and to support community and activism through materiality. The primary function of POCZP is to continue producing events that encourage people of color to make their own independent publications and to find other zines created by POC.

The project is establishing an archive of past and present POC-authored zines and supports current and emerging zine publishers to continue to create through advocacy, grants for zinesters and by producing events. POCZP is also establishing an archive of zines by people of color and making those zines available online. The long term goal of POC Zine Project is to provide a free on-line searchable database of the collection with links allowing users to download electronic copies of zines.

POC Zine Project was founded by Daniela Capistrano, a media literacy activist and media professional who identifies as Chicana, queer, and an edupunk. Other participants in group are Osa Atoe of Shotgun Seamstress, Mimi Nguyen of Evolution of a Race Riot, Cristy C. Road and Mariam Bastani.

In Fall 2012 the group organized the Race! Riot tour. The tour featured Atoe, Capistrano, Nguyen, Anna Vo, and Bastani. The tour included 20 events in 14 cities on the East Coast and Midwest with speaking engagements at six universities.