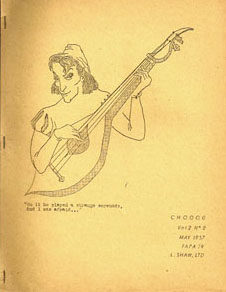 Chooog is a science fiction fanzine by Lee Hoffman, as 'Lee Shaw'.

Chooog was published in the 1950s in Staten Island, New York, U.S.A. The first issue appeared in 1957, Vol. 2, #2 in May 1957, and issue 6 was published in 1959. It is a mimeographed fanzine, made for the Fantasy Amateur Press Association. Lee Hoffman and Larry Shaw were married from 1956 till 1958, and Chooog was produced during this period.

Robin Bailey, in his article "Excavations", writes of this fanzine, "And finally, for tonight at least, we have CHOOOG from May, 1957...Again, it's on mimeo and is definitely a FAPA offering. Among other things, it contains a story by Lee Hoffman...entitled, THE HANGED MAN. The story is dated 26-2057. It's actually not a bad story, either. There's also the usual fannish gossip and artwork."

Lee Hoffman had previously published Quandry in the early 1950s, as well as the folk fanzines Caravan and Gardyloo, and continued publishing the long running Science Fiction Five Yearly. She had also released a few issues of Fanhistory, and The Chattahoochee, Okefenokee, & Ogeechee Occasional Gazette, a title in which the first initials of each word seems to have lent themselves to the creation of the title Chooog.