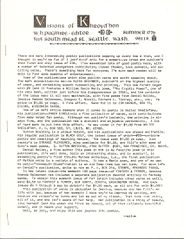 Visions of Khroyd'hon is a weird poetry and literary zine by Wilum Pugmire.

Visions of Khroyd'hon was published in Seattle, Washington, U.S.A., and released in summer of 1976.

Contributors of art work included David Billman, among others.

Wilum Pugmire also published the fanzines Midnight Fantasies, and Old Bones in the 1970s and Punk Lust in the 1980s. In the 2000s, he released the title Idiot Chaos for the Esoteric Order of Dagon, an APA devoted to Lovecraft.