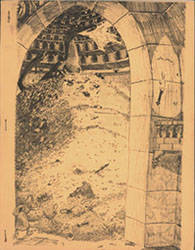 Entmoot was a science fiction and fantasy fanzine by Greg Shaw.

Entmoot was devoted to the works of JRR Tolkein. It was published in San Bruno, and then San Francisco, California, U.S.A. in the 1960s. The first issue, released in June 1965, and the second in October 1965, was edited by Greg Shaw with David Hall, who relinquished his co-editorship since he felt his interest in Tolkien was not suited for the serious nature of Entmoot with issue 3, published February 1966. Issue 4, the last issue, was released August 1966.

Ted Johnstone's poem in issue 4, The Passing of the Elven-kind was reprinted from the November 1959 issue of All Mimsy #5.

Greg Shaw was simultaneously publishing the science fiction fanzine Feemwlort, but it was Entmoot that gained Greg Shaw a certain amount of attention when it was written up in The Saturday Evening Post. He was also publishing a music fanzine called Mojo-Navigator Rock & Roll News. In the 1970s he went on to publish Metanoia with Suzy Shaw, and his best known publication, Bomp!.