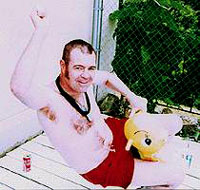 During a 1973 peace rally at the White House against the Vietnam War, Donaldson and several other demonstrators were arrested by police. That night, Donaldson was raped by dozens of prisoners and received injuries severe enough to require surgery. After recovering he held a press conference to recount the prison rapes publicly. Later, he became president of the Stop Prisoner Rape! organization. During subsequent incarcerations in the years that followed, Donaldson would partner with powerful inmates and trade sex for protection. His nickname Donny the Punk came from this arrangement, rather than his later involvement in the punk scene.

Donny the Punk was published in many punk zines, including Maximum Rock'n'Roll, Flipside, Second Guess, and J.D.s. He toured the U.S. and Europe in the 1990s doing spoken word and zine readings, as well as promotion for Stop Prisoner Rape. He was also active in the anti-racist skinhead movement and The Alternative Press & Radio Council, which sought to unite zines, punks, and record labels in the New York area during 1990s.