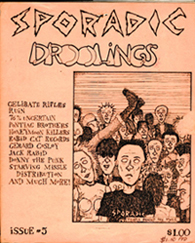 Sporadic Droolings is a music zine from New Jersey released in the 1980's.

Published and edited by Dave Burokas, Sporadic Droolings focused on various genres of music, particularly punk, as evidenced by interviews with bands like The Dils, The Nils, Minutemen, Marginal Man, Hard-Ons and Honeymoon Killers; but, as well, industrial groups such as Kommunity FK and Amor Fati were also featured; even country punk bands, like Rank and File, appeared in the pages of the zine. The focus was international, including features on the Australian scene and bands like Celibate Rifles, but the local New Jersey scene was never overlooked and always well represented. A number of personalities of the period were contributing writers; most were well-known for either being zine editors, such as Jack Rabid of The Big Takeover, or musicians, such as Bloody Mess, or, like Donny The Punk, Mykel Board and Shane Williams, as writers for the publications Flipside and Maximum Rock N Roll. The Art Department was Carrie McNinch, who created several covers for Sporadic Droolings, as well as many illustrations and comic strips. Extensive record and show reviews rounded out the publication, along with reviews of zines such as Conflict, Factsheet Five, Freedom Of Expression, Guillotine, Jersey Beat, Murder Can Be Fun, Non-Stop Banter, One Solution, Reasons For Living, Sick Teen, Sound Choice, Tse-Tse Fly and Twisted Obsessions.