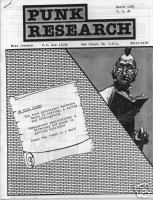 Punk Research was a zine from San Diego, California, by Michael Johnson.

The first issue appeared in May 1984. It was an 8 1/2" X 11" zine, consisting of five pages devoted to Punk and contained articles on the origins of the word 'punk', media inconsistencies about the origins of punk, and books about punk. An article on a search for a definition of punk featured a variety of zine editors' comments, including those of Thomas Siegal, editor of Ink Disease, John Molin of D.C. Riot, Elissa Rashkin of Hamsterama, Wilum Pugmire of Punk Lust, Joan McNulty of Harmony In My Head, Peter Hall of Blam!, Laura Miller and Rachel Levy of Issue, and Karin Kieser of The Last Thing, among many others.

The second issue appeared in March 1985. The eleven pages of this issue featured a bibliography of 'the most publicized hardcore bands in the U.S.', such as M.D.C., J.F.A., D.O.A., Minor Threat, Dead Kennedys, Husker Du, Black Flag and more. The feature article was "Punk: The Power of a Word" by Donny The Punk.