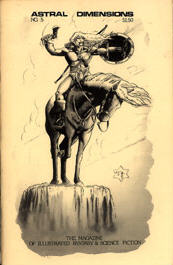 Astral Dimensions was a fanzine edited by Chris Marler and Mark Jacobs.

Astral Dimensions was devoted to speculative and weird fiction, and was published in the 1970s in Staatsburg, New York, U.S.A. The first two issues were released in 1975, with issues 3 and 4 following in 1976, and issues 5 and 6 published in 1977.

Also featured was a reprint from Weird Tales of "The Silver Key" by H. P. Lovecraft.