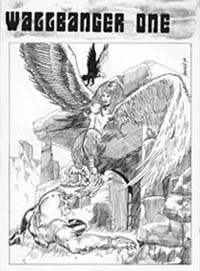 Wallbanger is a science fiction fandom fanzine by Eve Harvey.

"Wallbanger has never been interested in science fiction because science fiction isn't why I'm here", says Eve Harvey in issue 15. She explains further, "I'm here because I like people. I want to see the world through other's eyes and sf fans do tend to expose more of their innermost feelings than other social groups..."

Eve Harvey was also one of the editors of Vector and co-published GHAS with John Harvey and Carol Gregory from 1975-1977.