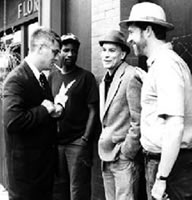 Mike Jackman, Yul Tolbert, Karl Wenclas, and Jeff Potter in Detroit, 2002
The Underground Literary Alliance is a Philadelphia-based, but internationally membered, group of zinesters and DIY writers who seek to expose what they see as the corruption and insularity in the American book-publishing establishment while providing alternative avenues for writers who don't easily fit into mainstream institutions and agendas.

The ULA has gained attention for its criticism of a literary practice whereby establishment authors serve on juries to award monetary prizes to their writing friends, particularly in cases where the prizewinning authors are independently wealthy. It has also criticized the aesthetics of modern literary fiction. In general, the ULA favors direct, vernacular writing over the cryptic and mannered styles taught in some academic programs. Members present their own literary aesthetic in their communal lit-zine Slush Pile. A quote from Karl Wenclas, the organization's Publicity Director: "The Underground Literary Alliance is the most controversial writer's group in America. We stand up for writers, expose corruption in the publishing world, and work to create a fun & exciting alternative to the literary mainstream."

The cover of the ULA's latest issue of its communal lit-zine, Slush Pile

The Underground Literary Alliance has its roots in the independent zine scene that flourished in the 1990s. The founders of the group were zinesters who connected with each other through Zine World: A Reader's Guide to the Underground Press or similar channels. The founding members were Karl Wenclas, Michael Jackman, Steve Kostecke, Joe Smith, Ann Sterzinger and Doug Bassett. The six of them met in Hoboken, New Jersey, in October, 2000, and launched the campaign by signing a statement of protest against a Guggenheim grant given to weathly author Rick Moody. The text of the statement reads as follows:

We the undersigned protest the year 2000 Guggenheim grant to well-known author Rick Moody, because it exemplifies the practice of giving financial assistance to already successful and affluent writers, well-connected, who clearly don’t need the help—while other writers abjectly struggle—and because this runs counter to the implicit charitable purpose behind the tax-exempt status of a foundation like John Simon Guggenheim.

In addition to the six who met in Hoboken, this protest was later signed by over 30 others. It was also sent out to approximately 300 established writers, editors, and agents, although none of them signed.

The ULA has engaged in what it calls literary activism through its zines, online, and in public protests. Its critical writings are often harsh and accusatory, while its protests usually involve comedy and performance art.

The ULA launched its own independent press in 2006.

The ULA has received criticism from inside and outside the zine community. Some have been put off by the group's aggressive approach to debate and promotion. Some ULA members have published (or continue to publish) zines, but self-publishers outside the group have criticized its focus on establishment literature.

Wenclas, the most consistently vocal member of the ULA, has engaged in lengthy online arguments (originally on alt.zines, and now on his blog[1]) with many ideological adversaries. ULA opponents have argued that the organization's stated emphasis on "spin" and "ballyhoo" contradicts its condemnation of openly narcissistic "postmodern" writing. 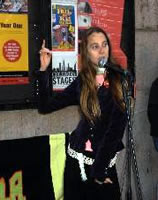 In late 2000, the six founders of the ULA signed a protest against the $35,000 Guggenheim grant awarded to Rick Moody, a successful author from a wealthy background.

In early 2001, the ULA held a press conference at CBGBs in New York City which was attended by George Plimpton, staffers at The Paris Review, and staffers of Open City magazine. The ULA debated with those who attended about what they perceive to be the irrelevancy and lack of integrity of the current realm of corporate/academia-sponsored literature.

In early 2001, the ULA crashed a reading at KGB in New York City. The members present disrupted the reading with outbursts and arguments, and were then thrown out of the venue.

Late 2001, the ULA protested against McSweeney’s being awarded Best Zine of the Year by the Firecracker Alternative Books Award. McSweeney’s does not fit the ULA's definition of the word zine.

Cronyism in the Lit World

The ULA protested the 2002 National Endowment for the Arts award of $20,000 to Jonathan Franzen, a famous and successful author. Rick Moody was on the NEA panel, and the ULA contested that this was an example of establishment insularity.

In early 2003, members of the ULA were kicked out of a reading at Housing Works in New York City after confronting the writers about their material. (One story was told from the point of view of a tree.)

In early 2004, a glitch at amazon.com revealed that David Eggers (of McSweeney’s and The Believer) had posted an anonymous response to reviews he believed were posted by ULA members (as reported by the New York Times). Eggers suggested that a series of negative reviews at amazon.com were written by ULAers in retaliation against a critical writeup in The Believer. As a policy, members of the ULA do not communicate anonymously, and all of them denied writing the reviews.

In April 2006, the ULA protested against a tribute to Allen Ginsberg’s Howl at Miller Theater at Columbia University, which they say was hosted by elitist academics and had no representation of the "underground" from which the Beat Generation had sprung. The AP covered the protest and reported on it in a podcast.