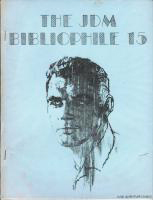 The JDM Bibliophile was a fanzine by Len and June Moffatt, and later Ed Hirshberg.

The JDM Bibliophile was devoted to John D. MacDonald (1916-1986), mystery and crime fiction author of 500 short stories, many for the early pulp magazines, and 78 novels, including his first, The Brass Cupcake, published in 1950, Pale Grey for Guilt, and The Lonely Silver Rain, featuring the popular character Travis Mcgee. It was published in California, U.S.A. in the late 1960s, and early 1970s. Issue 1 was released in April 1968, with #15 appearing in 1971, #17 in 1972. For some of the period it was published, it was distributed by the Fantasy Amateur Press Association as well as by the Moffatts.

The Associate Editors were William 'Bill' J. Clark and Ed Cox (Altair, Triton) for 22 issues. By 1978, William J. Clark had passed away, and after dedicating Issue 22 to his memory, Len and June Moffat handed over editorship to Edgar W. Hirshberg, an English professor at the University of South Florida in Tampa. The Moffatts continued to contribute a column. The last issue, #65, was published in December 2004, ending when Professor Hirshberg passed away that same month.

Columns included "...& Everything" by Len and June Moffatt, and "The Shine Section" by Walter and Jean Shine.