The Faces of Time 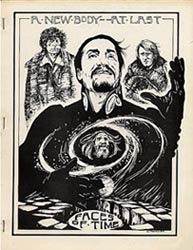 The Faces of Time was a media science fiction fanzine edited by Mary D. Bloemker, and published in East Boston, Maine, U.S.A. by Permanent Press/Dawnseeker Press.

The Faces of Time is an anthology devoted to the television series, Doctor Who.

The first issue appeared in 1981. The cover artwork was by Connie Faddis (Interphase), with interior art by Mary Bloenker, Connie Faddis, Stephanie Hawks, Deb Walsh. It featured, among other items, an interview with Terrance Dicks by Peter David, fiction by S. Brundige, and an article by Peter David. It also came with a special pull-out poster, "A Life in the Life of a Time Lord".

Issue 2 was published in 1982. The cover was by Mary Bloemker. It included writing by Jean Airey, Mary Bloemker, Lemore Dunlop, Mary A. Fall, Christy Reynolds, Robert St. John, and Linda Terrell. Poetry was by Linda Lanzi. Also included was a special pull-out poster, "The Faces of Time II", by Deborah Walsh and a porfolio by May Bloemker of a Tarot card deck featuring Doctor Who characters.