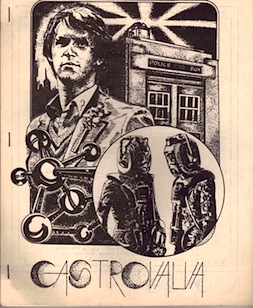 Released in 1985 in East Boston, Maine, U.S.A., Castrovalva was devoted to the television series Dr. Who, specifically the fifth doctor, played by Peter Davison. It was an 88 page one shot zine.

The cover art was by Stephanie Hawks. Interior art work was by Mary D. Bloemker.

Contributions of writing included "Sandcastles of the Past" by Heidi Bloebaum; "Peace of Mind" by Mary Bloemker; "Countercurrent" by Connie R. Faddis (Interphase); "Farewell" by Susan Fall, "Second Thoughts" and "A Friend in Need" by Patrice L. Heyes; "Brave Heart" by Cyndi Overstreet; "A Psychosis is not a Disease" by Elizabeth K. Shaw; and "The Circle Turns Again" by Judith C. Wilson.

Mary Bloemker also published the Dr. Who fanzine The Faces of Time.