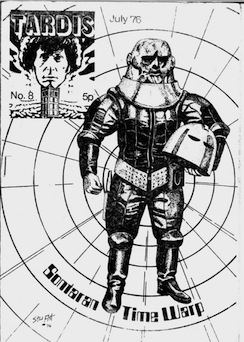 TARDIS was a fanzine published in London, UK, devoted to the television series Dr. Who.

First published in Spring 1975 by Andrew Johnson, the first issue of TARDIS featured a tribute to William Hartnell, an interview with Terry Nation and an article on The Six Million Dollar Man.

With issue 7 from May 1976, TARDIS became the fanzine for the Dr. Who Appreciation Society. The various editors from 1976 till the 1990s included Ann O'Neill (The Visitor), Geraldine Landen, Stephen Payne, Paul Mark Tams, David Farkil, Geraldine Landen, and Richard Walter.

Writing from TARDIS, along with fanzines such as Burnt Toast, Enlightenment, The Whostorian Quarterly, and others, appear in the fanzine anthology, Time Unincorporated 2: The Doctor Who Fanzine Archives, edited by Graeme Burk and Robert Smith, and published by Mad Norwegian Press in 2010.