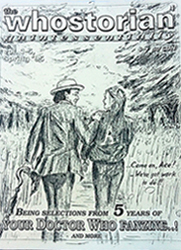 The Whostorian Quarterly is a media science fiction fanzine published by the As Yet Unnamed Doctor Who Fan Club of Newfoundland (AYUDWFCON) from St. John's, Newfoundland, Canada.

Stephen Nolan was one of the co-creators of the fanzine. Editor of The Whostorian Quarterly during the 1990s was Shannon Patrick Sullivan. In the 2000s, the editor was Marshall Lush. During that time, the fanzine had reached Volume 8, No. 4. The last editor of the print zine was Shannon Lush, who then teamed with Steve Lake to create a podcast.

Contributors of articles included Tom Beck, among others.

Fiction was by Jason Cantwell, and Joseph Keeping, among others.

Features from the print fanzine included the trivia column "Who Knew?", among other items.

Writing from The Whostorian Quarterly, along with fanzines such as Burnt Toast, Enlightenment, TARDIS, and others, appear in the fanzine anthology, Time Unincorporated 2: The Doctor Who Fanzine Archives, edited by Graeme Burk and Robert Smith, and published by Mad Norwegian Press in 2010.

The Whostorian is now a podcast and has also produced fan films, and other activities.