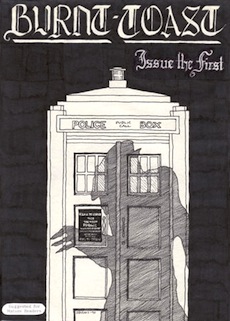 Devoted to Dr. Who television series and books, Burnt Toast was published in Sydney, Australia, in the 1990s, the first issue appearing in February 1990. The last issue on paper was issue 13, published May 1993. Also released was the Burnt Toast video. Although Dr. Who was the focus, the zine also featured book reviews, film reviews, and essays on other topics as well, with a special interest in horror.

Writing from Burnt Toast, along with fanzines such as Enlightenment, TARDIS, The Whostorian Quarterly, and others, appear in the fanzine anthology, Time Unincorporated 2: The Doctor Who Fanzine Archives, edited by Graeme Burk and Robert Smith, and published by Mad Norwegian Press in 2010.