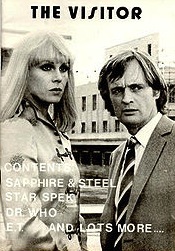 The Visitor was a media science fiction fanzine by Ann O'Neill.

Three issues of The Visitor were released in the 1980s in the UK.

The first issue appeared in January 1983, and featured content on Blake's 7, Doctor Who, E.T., and Sapphire and Steel.

Issue 3 was published in April 1984, and was the last issue.

Ann O'Neill was also one of the editors of the long running Doctor Who fanzine, TARDIS as well as the publisher of the titles 221B, Cry Wolf, and Standard by Seven.