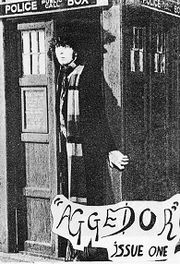 Aggedor was a media science fiction fanzine by Alec Charles.

Devoted to the television series Doctor Who, the fanzine was published in the UK between 1982 and 1986. Seven issues were released.

Fiction was contributed by Christopher John Harvard, and Jackie Marshall (Space Rat, Queen Bat), among others.