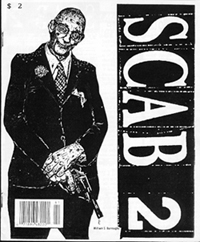 SCAB is a pamphlet-style zine by Johnny Noxzema published in Toronto, Ontario, Canada.

"This is the most hateful thing I've ever seen in my life, and I kind of like it," says reviewer K.O. in the October 1991 issue of Maximum Rock 'N' Roll. Issue one begins, "SCAB. The Society For The Complete Annihilation of Breeding. Our goal? The absolute obliteration of what is generally regarded as the American nuclear family. Our method? Violence, pornography, abortions, castration, mindless sex, mass murder, and the widespread destruction of private and state property." The zine goes on to speak of heterosexism, and refers to an interpretation of this expression in Marianna Valderde's book Sex, Power and Pleasure as beginning with compulsory heterosexuality. People (identified here as 'SCABS'), who don't fit this mold, "a woman 'too ugly to get a man', homosexuals, celibates, (straight) people who enjoy casual sex, even long-standing couples who don't accept popular 'couple' stereotypes - are considered failures and treated as such", as a result of heterosexism. SCAB acknowledges Valdere's observations but feels that to raise conciousness takes too long and they would rather "render our opponents UNconcious". SCAB suggest, "a little hatred can go a long way..." and declares, "The first place we'll bomb is Disneyland."

Issue two features a drawing of William S. Burroughs and inside explains, "William S. Burroughs on the cover of the long awaited glorious second issue of SCAB? But...he's gay. Yes, he is gay; gay NOT queer, there is a difference." The editor goes on to say "Gay and lesbian society is dying from the same diseases killing hetero culture -racism and sexism, and William S. Burroughs is a malignant tumor personified." This issue features an interview with Jena von Brücker and G.B. Jones; an opinion piece by Davey Galoona; a reprint of an article by Ben Weasel which declares, "Kids are rotten", which in turn inspires SCAB to name him "Hetero of The Month"; and the infamous quote "All victims of gaybashing DESERVE what they get. All victims of queerbashing are unfortunate cases of mistaken identity", which accompanies a map of popular gay spots in Toronto.

SCAB was one of the zines involved in what was referred to as the "civil war" of queers against mainstream gays and lesbians.