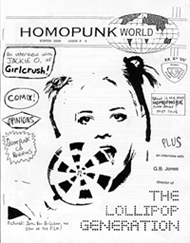 Several issues also include a special "Homo Punk Pioneers" page: Faebhean Kwest from the band The Raped appears in Issue two, Issue four features Lance Loud of the band The Mumps and Issue five presents Phranc from the bands Nervous Gender, Catholic Discipline and solo artist. Other features have included "The Most Homophobic Record Ever Made", and reviews of queercore CDs and fanzines.

In the winter of 2008 issue six appeared, featuring an interview with G.B. Jones about her film The Lollipop Generation, in which Anonymous Boy appears. The cover features the star of the film, Jena von Brücker. There is also a comic by the editor, entitled The Sad Tale of Dennis Down-N-Out, an interview with Jackie O. of the band Girlcrush, and other features familiar to fans of Homopunk World.