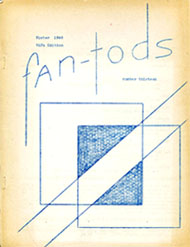 Fan-Tods is a science fiction fanzine by Norman F. Stanley.

Fan-Tods, subtitled "The Magazine for the Tod Fan", appeared in the 1940s, and was edited and published by Stanley in Rockland, Maine, U.S.A.. It was mimeographed using blue ink. Issue 1 appeared in December, 1942, with #2 appearing in Spring 1943, #7 in Summer 1944, and then following a regular quarterly schedule until issue #18 in 1949, after which there is a three year break, and then Issue 19 was published in the Fall of 1952, and was the last issue. Fan-Tods was an Apazine, distributed through FAPA (Fantasy Amateur Press Association) and VAPA.

Cover illustrations were by Rosco E. Wright (Beyond, Eusifanso), among others. By issue 7, Rosco Wright had become co-editor.

Contributions included an article on AE van Vogt's The World of Null A, by Thomas S. Gardner, a reply by John W. Campbell, Jr., and a rejoiner by Gardner. Other contributors included Louis Russell Chauvenet (Bonfire).

Jack Speer's 1944 poll of the top fifteen fans found Fan-Tods to be among the top 5 fanzines, although by 1947, in his fanzine Matters of Opinion, Speer writes the article, "The People v. Norman F. Stanley" in which he tears "bloody strips of flesh off the rugged individualism arguments put forth in the 16th FAN-TODS".