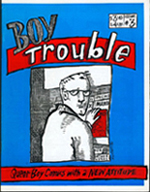 Boy Trouble is a zine devoted to queer comics, created by David Kelly and Robert Kirby.

Since its inception in 1994, four issues were released, with issue five being released in book form on the tenth Anniversary in 2004.

Previously, Robert Kirby had been the editor of the comic zine Strange-Looking Exile. He is also the creator of the syndicated comic Curbside.

The Book Of Book Trouble

In 2006 the anthology The Book of Boy Trouble was released, collating the best of issues 1 to 4 of the zine, as well as additional new work.