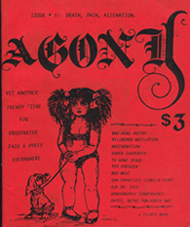 Agony is a queer zine by B.Boofy from Milwaukee, Wisconsin, U.S.A.

Agony was a zine published between the years 1988 and 1993, during which time five issues were released. It was a photocopied cut and paste zine with a bright color cover. Inside that cover, Agony featured articles such as coverage of SPEW, "The Homographic Convergence" of zine editors held in Chicago in 1991, which included photos of participants such as Vaginal Davis, Joan Jett Black, Johnny Noxzema of Bimbox zine, Criterion, the editor of No External Compulsion zine, and Jena von Brucker, of Jane and Frankie zine; photos of billboard modifications and mutilations; an interview with the band Die Kreuzen; "What I Did On My Summer Vacation", a photo story of B. Boofy's trip to San Francisco meeting Jennifer Blowdryer, local celebrities such as Elvis Herselvis, and Homocore zine editors Tom Jennings and Deke Nihilson; an article entitled "The Deadhead Problem and What To Do About It" lavishly illustrated with rifles and guns; an article entitled "Time Isn't The Only Thing The FDA Is Killing" about A.I.D.S.; and a humorous section called "Bad Homo Poetry" which includes verses contributed by Vaginal Davis.

The centerspread is devoted to contrasting the quotes of writers and artists with those of TV evangelists such as Jerry Falwell, whose quote, " There's a lot of talk these days about homosexuals coming out of the closet. I didn't know they'd been in the closet. I do know they've always been in the gutter." is answered by Oscar Wilde's words, "We are all in the gutter, but some of us are looking up at the stars."